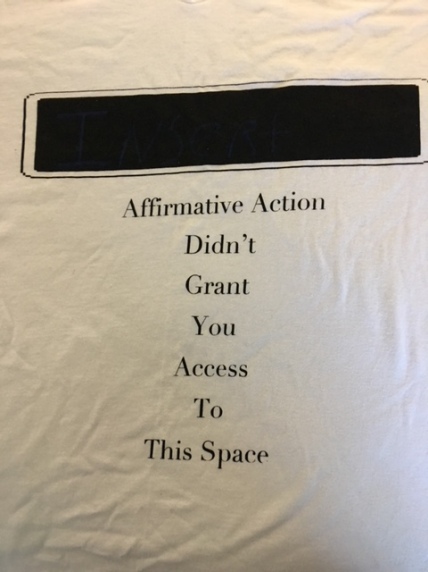 This isn’t another piece about “code-switching” because quite frankly, I do that well. This is a piece about how I almost let my separation from a former employer strip away my confidence in myself. This is a piece that for many Black people, but especially Black women, know all too well. I was too “Black” and too much of a “Black woman” for the all-white office I worked in long ago.

I was hired to implement a diversity program to teach folks about how to talk about identity and inclusivity. I accepted the job offer with the impression that I would be working in an office with people from various racial and ethnic backgrounds. I felt comfortable in that space during my interview. All of that changed the day I started work. I was told that the organization had did some restructuring and that I would now be working out of a different office: an all-white office. I admit, my vision of what my professional life would be at this new place in a new city quickly became obfuscated. However, I told myself to embrace this change and go in with a positive mind.

My supervisor at the start of my job told me she was leaving after my first week and that my new supervisor who would also be working in the new office, would be starting at the end of the month. She told me he identified as Latino and I felt a slight pressure lift off of my shoulders because I felt comfortable knowing I wasn’t going to be the only person of color in my new office. Let me tell you, I couldn’t have been more WRONG. But we’ll get to that part.

I took the initiative to slowly open up to a couple of my co-workers who identified as white women and who gave the impression that they recognized their whiteness and their privilege. It was cool at first. I started getting comfortable, let my sew-in down a bit, so they could believe that I was relatable and not an “angry Black woman”. My new supervisor soon started, and I trained him on how to do part of his job (yes, I trained my boss) and tried to get to know him a bit.

Our walls in the office were super thin so you could hear basically everyone’s conversations. I would have my music playing in my office, so I could concentrate on the work I was doing and not have to listen to others’ conversations. One day, I was on the phone in my office, chatting with a colleague who worked at another company. I was envisioning launching my very own blog that would be a place where I could share stories about things I’ve been through and have conversations that centered around Black womanhood. I told her that I was interested in writing about Black women’s sexuality and how it has been demonized since slavery and Black women have been labeled as sexual objects.

My co-worker that shared a wall with me (one who was talking about porn in my office a few weeks prior), was listening to my conversation, went and told the director of our office that I was talking about oral sex in my office. The director passed that information down to my boss and my boss brought it to me. He believed that I was actually having an inappropriate conversation. There was no support from him. I was angry. I decided to go report my co-worker and my boss to human resources. I told them they I felt targeted in my office space and I did not feel comfortable being there. Of course, I wasn’t granted permission to work in another office.

Weeks passed, and I made it my duty to stay to myself. I did my work (because regardless of the lies they told on me, I ran that entire program by myself), I kept my door closed, and only communicated with others in my office when it was time to work on a project together. I remained professional and decided to not have any personal conversations with anyone.

Others in my office soon started telling my boss that I didn’t inform them on an event or send them an email. Just making up things about me. My boss, again, believed them, and when I showed him proof that they received all communication (and he was CC’d on every single email!) he still didn’t apologize. I was clearly upset, and I professionally told him that I don’t feel supported by him and that he was presuming that I was incompetent as a Black woman in the office. I told him how for weeks, he was taking the sides of the people in my office and neglecting the fact that I was his supervisee and that he should know that I was doing my job.

All while the little microaggressive things were happening to me in the office, I started going to therapy. I was depressed and unhappy with my work situation. One time, I had a break down in my office because I was so overwhelmed, I told my supervisor that I needed to go home and take a sick day…but I marched straight to my therapist because I was going to lose my shit.

One day, I saw my supervisor crying in one of his co-worker’s offices and by the end of the day, he had gone home and that was the last time I saw him. The next week, human resources comes into my office and places me on paid administrative leave while they conducted a workplace investigation against me. They would not tell me why I was being investigated but I figured it had to do with everything going on in the office. My allies at the company informed me that my supervisor had returned to work the very next day of my administrative leave. I knew something was up.

For over three weeks, I sat at home not knowing what was going on with the investigation. I found a lawyer and was ready to head to court if need be. When I received communication about the investigation, it was found that I violated the “anti-bullying” policy by creating a hostile work environment for my supervisor and co-workers, I was insubordinate and did not complete assigned tasks given to me by my supervisor, I was unprofessional, and the list goes on of the encrypted words of discrimination they hit me with. I was livid.

At my investigative hearing, the hearing officer hit me with all the lies my boss and co-workers made up about me. They weren’t prepared for all the receipts I had, though. I had saved every email communication between me and my supervisor, me and the director, me and HR, me and co-workers. I had a timeline of events typed out that proved that I was the victim of discrimination by those in my office and that the only reason why I was being investigated was because I was the only Black woman in the office and this was their way to get me out. The hearing officer wasn’t prepared for me to have any type of rebuttal. He said he was going to need another week to go back and speak with the ones in my office again. He made sure to reiterate the company’s retaliation policy to ensure I didn’t speak to anyone in the office.

Long story short, the company and I parted ways after me working there for 7 months. They packed up my office and mailed me a box full of my things that I had left. One of the items included a shirt that said, “Affirmative Action Did Not Grant You Access To This Space”. Mind you, the shirt wasn’t mine. They purposely placed that shirt in my box of things to let me know, I wasn’t welcomed.

I am thankful that God saw fit for me to go through that situation, so I can use that to be better, to continue to fight for social justice, and to have a testimony for when I things started to look up. I wish no hard feelings on anyone in that company. My job was to run a diversity program and the only thing I regret was not trying to educate those in my office more about cultural competence.

I urge all Black women to make sure that when you are interviewing for jobs, that you ask questions to know about the work environment you are going to be a part of. We can’t control organizational changes but be cognizant of your environment. Be watchful of the relationships you begin to build. Understand that just because you may have another person of color in the office, they may not have your best interests in mind. Find allies in other departments or in other areas. Build a community of support outside of your workspace. Don’t let the stress of a hostile work environment be a strain on your mental health. Seek therapy as an option and find ways to take care of yourself. Recognize that you are not held to the same standards as your white counterparts. KEEP YOUR RECEIPTS. Save every email, write down everything. But always remember what the Great Beyoncé once said: